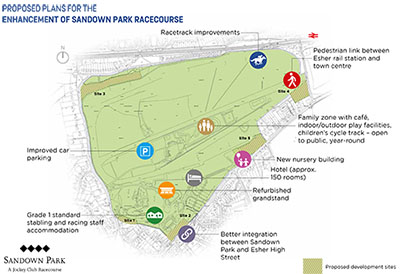 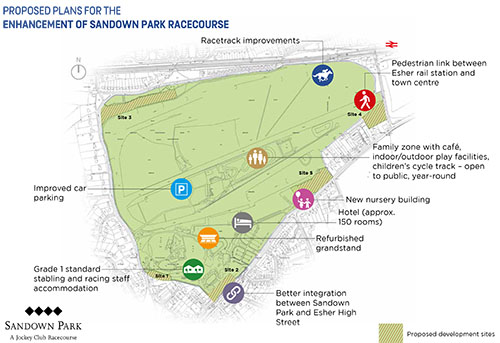 Following the initial public exhibition held on the 15th of December, Sandown Park have announced a follow to be held on Tuesday the 15th January between 19:00 and 21:30 in The Owners and Trainers Suite (approach via Grandstand entrance).

This event will be another opportunity for members of the public to view and discuss the proposals with the Sandown Park team, but also to hear their initial response to the feedback received at the first exhibition.

You can read more details on the proposed enhancements below:

Sandown Park is holding a public exhibition on Saturday, 15 December to consult people who live or work in Elmbridge on proposals to make some exciting new enhancements to the racecourse, including additional community facilities, ahead of submitting a planning application.

The proposed enhancements include:

To fund these enhancements, five small and discrete sites have been identified as potential development opportunities on the edges of the Sandown Park site, which would include affordable residential units. These sites are each on previously developed land or adjacent to existing buildings and, combined, cover just 5.1% of the whole site.

Phil White, Regional Director, London Region, Jockey Club Racecourses, said, “Sandown Park is one of Britain’s favourite racecourses. It is also a major visitor attraction, employer and business destination, making it a significant economic contributor to, and important social and cultural asset, for Esher and the Borough of Elmbridge.

“However, much of Sandown Park’s infrastructure is ageing so to continue to drive benefits for both the community and the horseracing industry, we’re keen to undertake an investment and upgrade programme on the site over the next few years. The proposed plans have been designed to facilitate this.”

Sandown Park would like to invite people who live or work in Esher to attend an exhibition of the proposed plans. The team will be on hand to answer questions and take feedback. The arrangements for this event are as follows:

The Owners and Trainers Suite* at Sandown Park

* Attendees should enter the racecourse through the main grandstand entrance and they will be directed to the Owners and Trainers Suite.

You can view the proposal in detail here: