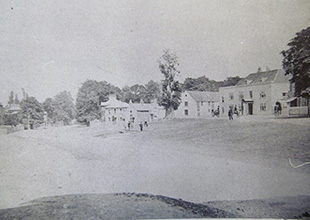 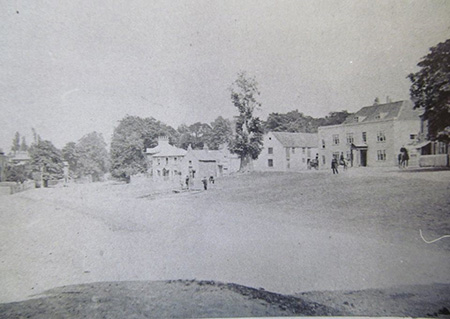 Esher -Some Notes of Historical Interest

Esher`s earliest known settlers were here in the Mesolithic  period  5000 years BC . They lived at the Warren now part of Sandown Park  adjacent to More Lane. A high point  with a clump of trees and not far from the River Mole. An ideal  place  in which to  live and  keep an eye out for any unwanted visitors. They left behind flakes and hammerstones  to be discovered  during the Second World War.

Pottery,loom weights and turf huts were found at the same site dating from 300 years BC  , the Middle Iron Age.

No evidence has been found of any Roman occupation of Esher .

During World War Two three Saxon graves were discovered at the Warren.

The Domesday Book  records the equivalent of 1,925 acres of land being cultivated. The land was held by  Hugh de Port, William de Wateville, Rainald, the abbot of the Cross of St Leutfred  and Odard the cross-bowman. Esher  was in the Hundred of Amelebridge. Amele being the old name for the River Mole.

The first church was built  between the 10th and 12th centuries and a few pieces of stone have been located in the walls of St George`s Church itself built in 1540.

The Manor of Esher Place was held by  the Abbey of St Leutfred`s Cross  in the Domesday Survey and it had several more owners during the following 400 years including Bishop Wayneflete and Bishop Rayleigh.

The remaining part of this building is the Gatehouse now known as Wayneflete Tower which fronts on to the River Mole from whence visitors would have arrived.

The Esher Place Estate  was occupied by its most infamous  resident Cardinal Wolsey  who was Chancellor of England for King Henry V111 who arrived in 1529. His stay was short lived and he left in 1630.

A time team television programme was filmed there recently and  can be located  on the internet.

Esher`s other famous building was Claremont which was built in 1708 by St John Vanbrugh. He sold it to the Duke of Newcastle, later to become the Prime Minister. The Duke extended the building to what we see today.

In 1816 Princess Charlotte and her husband Prince Leopold took up residence  at Claremont. The Princess was aged 21 when in November 1817  she give birth to a stillborn sorn and she herself died the following day.   The whole country went into mourning none more so than the local inhabitants.

Leopold continued to live at Claremont and  was visited on  a few occasions by his niece Princess Victoria.

Had Charlotte lived  the country would have been ruled by Queen Charlotte and not Victoria.

The Claremont Gardens were laid out in the early 18th C  as they are seen today .The Lake, Amphitheatre  and Belvedere Tower  all  dating from  then. Today the Gardens are held by the National Trust.

A new Parish Church was built in Esher in 1854  called Christ Church.

Tucked away in Claremont Lane is  a Quaker Meeting House built in 1797 with its own small graveyard.

The development of Esher  revolved around its  transport and communication links. Firstly the River Mole ,secondly the Portsmouth Road and thirdly the building of the railways.

Esher grew alongside the Portsmouth Road with its Inns and shops. The Bear Inn being the focal point in that development.

In the mid 1700`s the Portsmouth Road was diverted  at the behest of the owners of Claremont.

The diversion begun at what is now the Scilly Isles and proceeded down Littleworth  Road  to the Swan Green at Hare Lane.  From there up Milbourne Lane into Claremont and across the front of the Mansion coming out on the Old Portsmouth Road at Blackhills. Along that route are three milestones from that period.

On the 9th of April 1770  Esher Green was the scene of a hanging. A Russian sailor Stephen Gregory was convicted of the murder of Ann Herne  who lived near the Wheatsheaf with her husband William. Poor Ann`s  throat had been  cut by the sailor. It is recorded that  William Herne was a gardener at Claremont.

In 1854, in a cottage overlooking West End Green and Pond, Mary Ann Brough, 43, murdered six of her seven children . Mary Ann was once a wet nurse to the Prince of Wales and her husband was a servant in the  Royal Household at Claremont.

Mary Ann was deemed by the Court to be insane and was detained at Her Majesty`s pleasure. Esher thus became a place to visit and apparently hundreds of people came from London to view the cottage.

The railway arrived in 1838 and the station was initially called Ditton Marsh. This name was short lived and the second name chosen was Esher and Hampton Court. Subsequent names included Esher for Claremont  and Esher for Sandown Park.

The opening of the railway spelt the death knell of the  horse drawn coaches.

These had operated between Esher and the Bolt in Tun Inn in Fleet Street for hundreds of years and the Inn was closed in 1853.

The Mills at Lower Green have a history of various uses including the production of copper wire  in the 17th and 18th centuries by some Dutch industrialists and Esher had several Dutch families resident at the time. Indeed I am one such family in my family tree marrying into my family at that time!

In 1902 the mills were bought by James Burns bookbinders and  they employed a considerable work force. Indeed following a fire  in the early 1900`s it was reported in the Surrey Comet that 300  women were put  out of work.

With the pressure on land for  houses and in Esher`s case large houses bought the demise of farms and agriculture. Nowadays  there are no cows to be milked or peas to be picked. I don`t suppose there are any agricultural labourers living in Esher anymore!