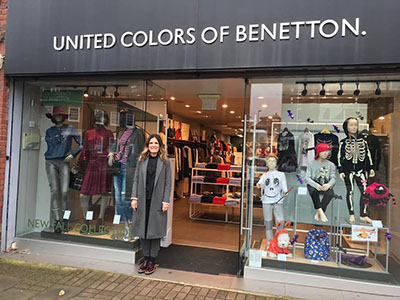 My obsession with clothes began at a very early age.

Playing dress up with my Grandmothers wardrobe.

Clomping around in shoes at least 5 sizes too big , draped in numerous pearl necklaces and a fur stole (which to my horror I found out years later was actually originally a fox).

As soon as I was old enough, 14 back then, I got my first Saturday job with Chelsea Girl (now River Island). I loved every minute of it; there my aspirations began to one day own my own clothes shop.

After leaving University I had planned to join M&S on their graduate training scheme but I started working as manageress in a small United Colors of Benetton franchise in Ipswich.

As a huge die hard 80’s Benetton fan, loving the colourful knitwear, striped rugby shirts, logo duffle bags and some what controversial advertising, it was a dream come true.

From there I became an Area Manager, progressing onto buyer for Benetton UK and travelling regularly to their HQ in Treviso, Italy.

For those of you who have never been, Treviso is a beautiful, medieval city in the north of Italy and back in the day it was famous for 3 things…Benetton obviously; Rugby..not really my bag; and a rather lovely fizzy white wine called Prosecco, which I used to sneak through customs in bulk before it became readily available in Waitrose!

Eventually marriage and family came along and the travelling became tough.

We had taken the familiar journey out of South West London and down the A3, settling in Thames Ditton – an oasis of calm, which we loved then and still love today.

My office had now moved to Esher, above Churchods Estate Agents and it was over a lazy lunch on the high street that I came to the conclusion that Esher was seriously lacking a high street label offering quality and affordable ladies and kids clothing.

So when a unit became available next door to the popular and well established restaurant Red Peppers, I jumped at the chance and United Colors of Benetton, Esher opened its doors in April 2007.

Something that you may not know is that all Benetton shops in the UK are independent franchises.

I own the shop and choose the seasonal stock based on my experience of what works for my customers in Esher.

Having worked in Esher for a few years I had built up a an idea of what I felt my ideal customer would want.

I instilled in my staff from the very beginning that I wanted to create a relaxed , friendly , comfortable environment , but always being on hand with style advice if needed without customers feeling pressurized to buy .

We had an overwelming response when we opened from both customers and fellow retailers!

I think having a recognized brand on the High Street helped Esher to become more of a shopping destination that you could pop to rather than making that dreaded trip to Kingston.

Soon after  O’Keefe and Blink two more independent ladies fashion stores opened and I felt the High Street had a real buzz about it .

Mums would pop in after school drop off, and ladies who lunched would come and brows our latest arrivals.

However, increased rents and customer shopping habits increasingly buying more on line have changed the face of the Esher High Street. Forcing many small independant businesses to close and seeing only big chain restaurants, kitchen shops and charity shops the only ones to remain

Having spoken to lots of customers they all seem to feel that parking difficulties and the lack of variety of shops put them off from taking a trip to the High street in favour of going slightly further afield which is such a shame.

Many small towns offer periods of free parking on Saturdays which I feel would definitely benefit our High Street.

It would be wonderful if Landlords, Elmbridge and Surrey Council could work together to support small businesses and shop local before Esher becomes like lots of towns up and down the country , an array of empty shops and boarded up buildings.

Next time you have an hour to spare take a wander down to the High St and please do pop in and say hello!

You can also find me on Social Media:

And Finally…if any of our Borough or County Councillors are reading – please, please #HelpTheHighStreet and do something about that parking!